In this retro piece that I wrote back in 2006, you’ll get to meet a woman and her husband who, at that time, offered sock monkeys for adoption as part of the appeal to purchase. Melanie Moxley-Johnson now teaches at the University of Missouri, Columbia (MU), and as far as I can tell, no longer makes the delightful creatures to sell at craft fairs. However, the story is fun and who hasn’t owned or known of a special sock monkey? ~BB

As a longtime sock monkey owner, I was drawn to the sock-monkey booth at the Hartsburg Pumpkin Festival last October where dozens of sock monkeys waited to be adopted.

Melanie Johnson-Moxley and her husband, David, monkey-sat the little darlings while shoppers reminisced about the sock monkeys in their lives. Although Johnson-Moxley’s monkeys may be fashioned from a long tradition, her Web savvy skills have aided her in offering her creatures for adoption from her home in Columbia.

While attending MU, she and her husband formed friendships with Whitney Shroyer and his wife, Letitia Walker.

Whitney and Letitia factor in the transition from Johnson-Moxley merely liking sock monkeys to going ape over them. She says, “In the spring of 2003, Whitney and Letitia launched the Red Heel Message Board [now defunct], a message board  for sock monkeys. They’d been collecting vintage sock monkeys for years and had the idea to write a book using characters based on these monkeys.” [Note: check this website for more info on sock monkeys.]

Johnson-Moxley watched the Red Heel message board and says, “I wanted to play, too! I created Daisy Marie, my ‘first-born’ sock monkey girl, along with her sibling, Wendel, in June. I made her from a kit and dressed her in Laura Ashley.”

She continues, “Then I created her adventure Web page, because she was constantly on photo shoots. By December, I’d decided that everyone I knew needed to be playing with sock monkeys, too, so I created the Sock Monkeys of Christmas – 15 of them in a month for my family and friends.”

She recalls, “I found an auction of vintage red heel socks – those made by the Nelson Knitting Company in Rockford, Ill. The white toes of those original vintage socks are much larger than those on the contemporary red heel made by Fox River Mills in Iowa, which meant a much larger canvas for my explorations.” 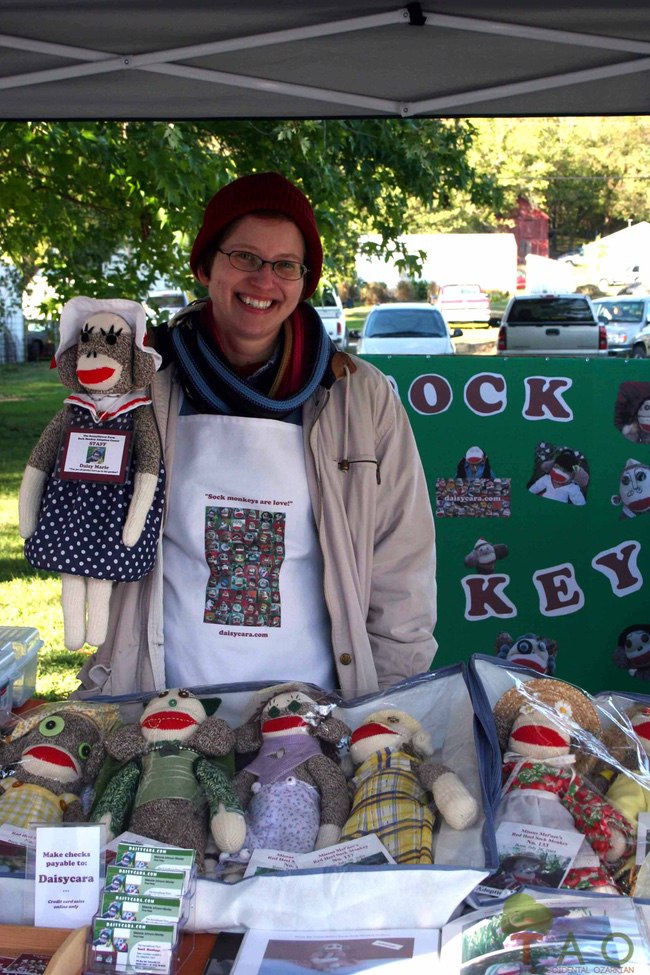 Consequently, she embroidered eyes and facial art. She worked on ears and dabbled in hairstyles, “Meeting that challenge of discovering uniqueness in the classic, brown-and-white red-heeled monkey has become a passion now.”

By June 2004, Johnson-Moxley decided to create an online adoption center, daisycara.com [also, no longer in existence].

No two monkeys look alike, and not all are priced alike. She explains why: “A number of factors influence price, and those include the cost of materials and the length of time it takes to make a particular monkey. Some of the monkeys’ costumes I have made from scratch, and others I’ve altered from vintage stock.”

Since sock monkeys have skinnier and longer limbs than other stuffed animals and dolls, Johnson-Moxley tailors clothing to fit each monkey.

She says she did not pattern the adoption procedure after the Cabbage Patch doll craze, especially since, “I was a teenager … and wasn’t tuned into what all of that involved.”

She continues, “I came up with the idea of adopting monkeys because if you start from the premise of treating them like people … then the idea of selling them becomes a funny one.”

She muses, “You don’t want to endorse sock monkey slavery, after all! So it made sense to set up adoptions, instead.”

Johnson-Moxley has adopted about a dozen of the monkeys for herself. She explains, “I have had a soft spot for every single monkey I’ve ever made. But Daisy Marie does have a certain something, and she will always be my first.”

With the glitz of Toyland today, what is the appeal of the common sock monkey?

For Johnson-Moxley, the appeal lies not only in the creation of the critters, but also in the tradition.

She says, “It’s something powerful, that’s for certain. A number of people in the Midwest grew up with one. Virtually everybody has a story about a sock monkey.”

She elaborates, “For some people, I think the sock monkey brings back happy childhood memories, or at least invokes the general idea of a simpler time, when play was conducted through imagination and the barest of props.”

Although Johnson-Moxley realizes that some unfortunate sock monkeys get put together in sweatshops, she also considers these monkeys to be “absolutely alike.” She says, “This seems to be the opposite of what sock monkeys are about. There’s no ‘spirit of the Great Grandma’ in sameness. No creativity.”

As for Johnson-Moxley, “I keep making the monkeys because it’s so creatively satisfying, and I keep putting them up for adoption because I think this world can use a little whimsy in it.” To see Johnson-Moxley’s sock monkey adoption center, go to www.daisycara.com/monkey/DOPTION_CENTER/. She delivers monkeys in the Columbia area on Fridays and Saturdays through Dec. 17. She recommends placing orders by Dec. 15. 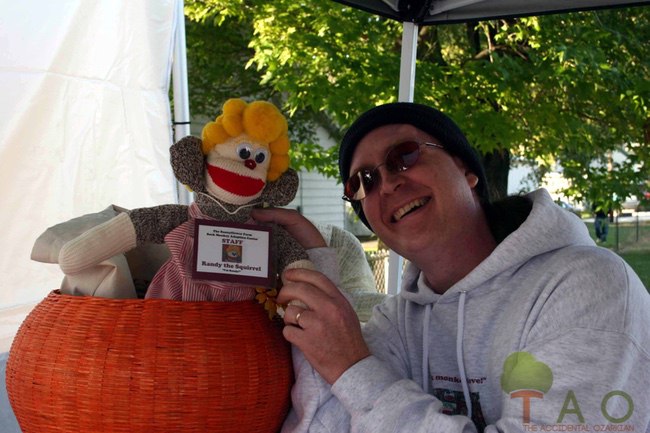 History of the Sock Monkey

Melanie Johnson-Moxley, Letitia Walker and Whitney Shroyer have created their own monkey mythology, where “the sock monkey was born on a cold winter’s night in the heart of the Appalachian Mountains through the hands and love of the Great Grandma.”

She says, “The idea is that you take what you have, however humble, and make something wonderful.”

According to Johnson-Moxley, the history of the sock monkey is based on oral reconstruction. The socks themselves came from Rockford, Ill., when in the 1880s The Nelson Knitting Mills manufactured work socks, worn by farmers and laborers.

A few years later, mothers began sewing the socks into monkeys and other stuffed animals for their children. By 1920, each pair of Red Heel socks included directions for crafting the sock monkeys. 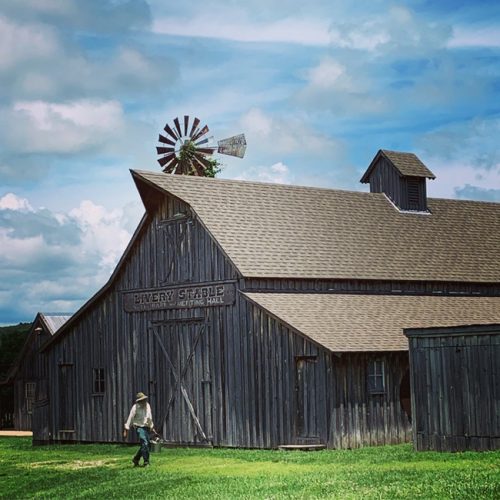 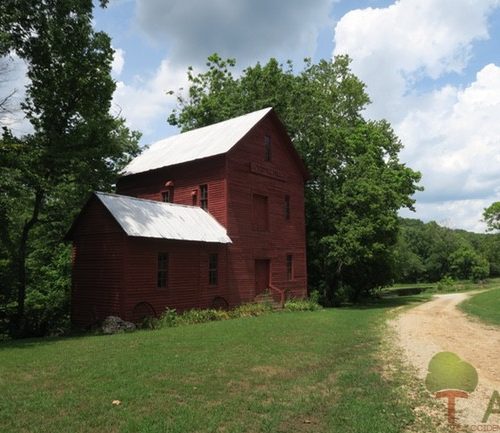 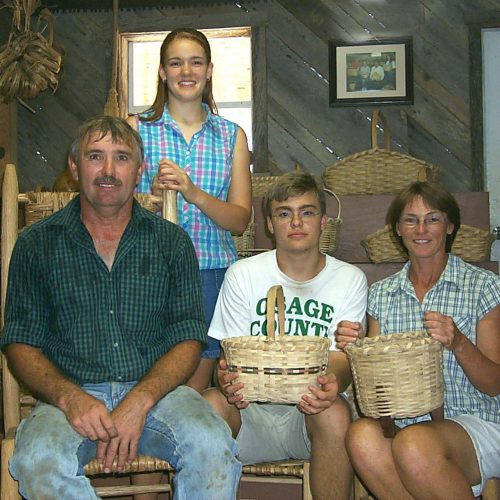 I Met the ‘Martha Stewart’ of the Ozarks