If you drive by the old Derby Station on East James Boulevard, in St. James, Mo., you can’t miss it.  A big birdhouse sits in front of it on a post surrounded by herbs and perennials. The old gas station is now a flea market busting at the seams with treasures found and created by Cathy Warren, a resident of St. James since 1994.

“I think I was in the second grade, and I was always doodling and drawing women and designing dresses, and my teacher told my mom at a PTA meeting, ‘I think Cathy’s going to be a designer!’” says Warren. 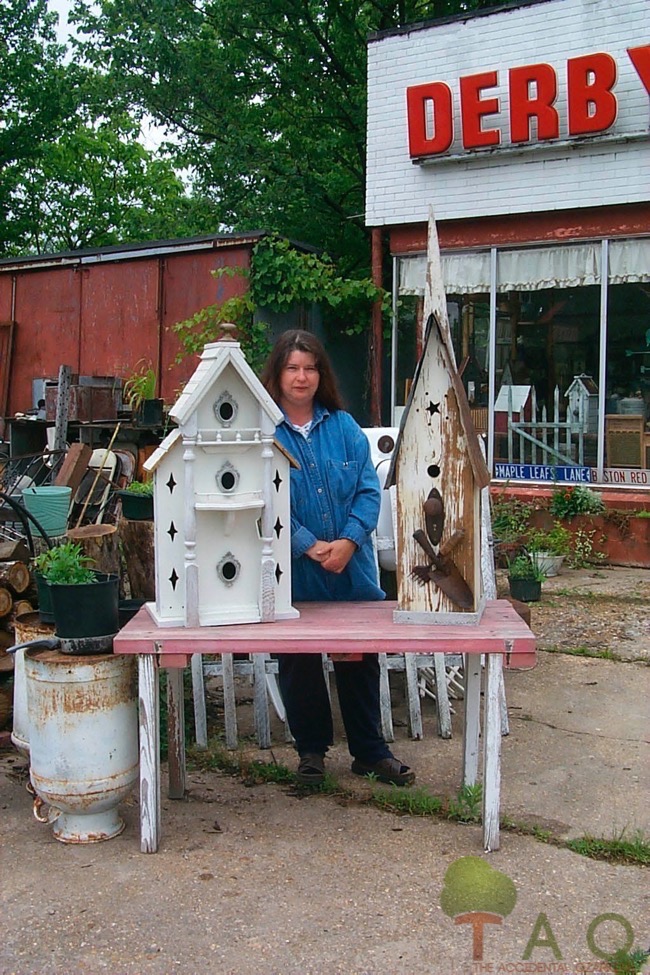 Little did that teacher know that her prophecy was partly true; in fact, Cathy Warren is a designer – of folk art – specializing in Victorian-style birdhouses.

Warren came to St. James after living in Florida for about 20 years. She tried to run a flea market near Dixon, but found that the traffic flew by her place without stopping. She wanted to offload some of her worldly goods, and when she met Lyle E. Staab, she asked if she could rent a room at his gas station for the purpose of selling merchandise.

She describes herself as having “ a passion for yard-saling,” and says, “I figure I had to justify it to myself, when I bought something, I had to get rid of something else …

Then I found out it’s hard to get rid of something else.” When she discovered that the old Derby Station was located in a prime location for a flea market, she started shopping more. She also married Lyle. “Now, I don’t pay rent anymore,” she says, with a grin.

Besides selling vintage items, she also started creating folk art and recalls, “I don’t know how it really came about … I think I took an old bed frame and made it into a bench … it sold and I thought, ‘Hey, that’s cool.’” She adds, “ I’ve just always been able to take junque, or stuff that other people throw away, and make a use for it.”

Warren also built a birdhouse and put it on a tall post out front. She says, “After I got it up there and the birds took it over, it seemed like every other person wanted that bird house,” and then exclaims, “I couldn’t sell it with the babies in there!” She recalled how folks would try to uproot that birdhouse, struggling to get the whole post out of the ground before finding out that it wasn’t for sale.

Because of that incident, she decided to build birdhouses to sell. Usually Warren’s inspiration for the design begins with a piece of wood, or sometimes she spies a photograph from Victorian times and patterns a birdhouse after the model. To her chagrin, the finished product might not quite look like the original model, but then, that’s okay, because it’s folk art.

She keeps a photo album of birdhouses under the counter, where pages reveal miniature churches, stores, barns and even a bird condominium. “I’m constantly on the lookout for a new design or for something to put on one of them. I’ll see a part of an old building and I’ll sketch it, and I’ll try to duplicate it.”

She also creates butterfly houses with diamond shape slits, and has recreated a Victorian porch railing for the top of one birdhouse. She pointed to the railing and chuckled, “That’s when my jigsaw blade was going whacko on me.” But, she kept the distressed look intact, calling it folk art and not letting it bother her at all.

“I enjoy making them,” she says, with the cool confidence of an artist who is happy with her station in life. When Staab asked, “Instead of just making one at a time, why don’t you make two or three at a time?’ she said, “But, that’s like a factory job and I’d get bored. I try to make them all different, anyway.” Prices range from $25-$150.

Not only does she build birdhouses, she has created wind chimes, plant holders, and plate racks from odds and ends of wood and metal. The flea market business also keeps her on the lookout, and she says, “I buy it wherever I can find it; it may be an auction it may be a yard sale … Lyle minds the store and I go out buying.”

She and Lyle also tend the patches of healthy herbs and perennials, often scooping a chunk of dirt with an herb right out of the ground for a customer. The pair plans on expanding the perennial and herb business in the near future.

One of her favorite things about the location is that it’s on Old Route 66, attracting enthusiasts from all over the world. She says, “They’re not after anything, but nostalgia. They’ll come in and look.” She asks them to sign the guest book, too.

Another local folk artist creates rustic birdhouses and sells them in the shop, too. Some of the women’s birdhouses can be found at the Antique Mall on the South Outer Road of Route 66, near Country Club Drive.

Warren’s ability to create interesting and useful items out of castoff materials keeps her outlook fresh. She says she wakes up every morning and looks forward to going to work, explaining, “I was raised in restaurant work from the time I was nine and I owned a restaurant and I’ve managed restaurants and I just know that that’s something I never want to do again … this is totally different, and I enjoy it. I used to have jobs where I’d go and I’d get about two blocks away from them, and I’d get sick on my stomach and think, ‘I don’t want to do this.’”

She adds, “ I’ll never have another job where I feel that way, and I haven’t.” 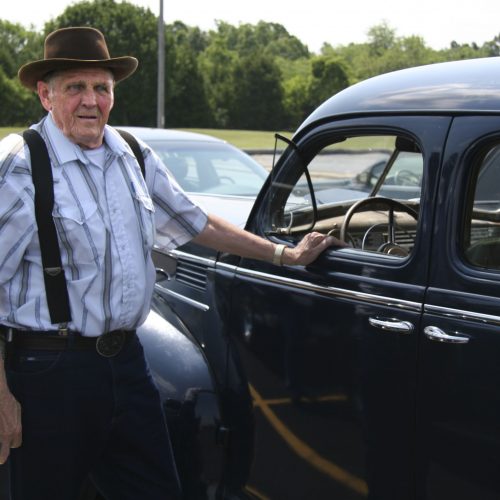