Ever since my trip to Frankenstein, Missouri, I’ve wanted to return to the hills and dales of the old-country communities that lie east of Jefferson City. When I saw the beautiful photograph of Bonnots Mill in an issue of “Rural Missouri,” I knew I had to get up there.

So I called my pal from Vienna—the one who likes to poke around in old graveyards—and off we went for another adventure. Toward the end of the day, I wound up in a belfry ankle-deep in guano, but that’s another story for another column.

Bonnots Mill is actually the result of the moving and merging of three former French villages. The first village, Cote Sans Dessein, once flourished as a fur-trading post across from present-day Bonnots Mill on the Missouri River in Callaway County. Historians date this first settlement at the end of the 18th century. French-Canadian fur trappers traded with customers such as the Osage, Shawnees and Delawares.

When the Missouri River started changing its course sometime between 1805-1810, it cut into the town of Cote Sans Dessein, prompting some folks to move across the river to present-day Osage County. They called the new place French Village.

In 1819 the first steamboat churned past French Village on its way to Chariton. Soon steamboats pulled up alongside canoes on the banks of French Village. Throughout the years, French Village supported the steamboat industry by supplying enthusiastic pilots who not only navigated the waters of the “Big Muddy,” but who also pushed their crafts up the Osage River for another 200 miles. By the 1850s at least 26 steamboats and about 80 packet boats traversed the nearby waterways.

Once again the Missouri River changed its course and cut into French Village. A flood in 1844 covered the last remnants of French Village. By then its inhabitants had pulled up stakes and moved farther upriver to the new town of Dauphine.

In the 1850s, Dauphine became home to a French immigrant named Felix Bonnot. As a child of nine, Bonnot had come to New Orleans and moved up the river with his family until finally settling in this part of Missouri. In 1851 he married another French immigrant, Lucine Party. Then he bought a farm where the town now lies, became the town’s proprietor, and built flour and saw mills and a general store.

According to a book by the Bonnots Mill Community Betterment Association, the French influence can be observed in long lots of 30 by 105 feet per city block —long enough to accommodate a garden area out back. A little controversy occurs over whether or not Bonnot actually named the town. There are those who believe Dauphine had been previously named by the folks who moved upstream from French Village. There are others who believe Bonnot named it after a southern province in France.

By the mid-1850s railroad tracks had been laid through the county and Dauphine thrived as a trade center with its additional source of transportation. Bonnot acted as postmaster for the town of 100. He died in 1880, and his widow took over as postmistress of the village and manager of the businesses.

In 1920 the town incorporated as Bonnots Mill and some say that with the river on one side and hills on the other, it soon ran out of space to grow. Then the automobile caused river travel to decline.

Today Bonnots Mill still sits down in a holler near the Osage River, quite nicely preserved. Without many shops or any tourist traps, the little town invites visitors to step into the past days and to get out of the car and walk the hilly streets. Several of the homes in the town are on the National Register and are duly noted.

At the entrance to the town stands the little old Methodist church, circa 1915, complete with its new pink roof. When my pal and I asked the owner of the little store across the street from the church why the roof was painted pink, she said, “Well, it’s that old story about the paint chip not exactly being the color you think it’ll be.”

Supposedly the folks at the church wanted to be historically correct about the color of the roof and ordered a “dusty rose” paint from Texas. After the men painted the roof, the women looked at it and were aghast at the effect. So according to the woman at the store, the women of the church decided the door should also be pink, “to tone the roof down a bit.”

My pal and I liked the Pepto-Bismol pink, or Barbie-doll-accessories pink. In fact, that pink sort of grew on us and by the time we’d driven and walked by the church a few times, I’d say we were in agreement that it was a very nice shade of pink. My pal said, “It makes a statement.”

2018 Update: The roof has been painted green. The church was deeded to the Bonnots Community Betterment Association and is available for weddings and gatherings. See its Facebook page for more information. 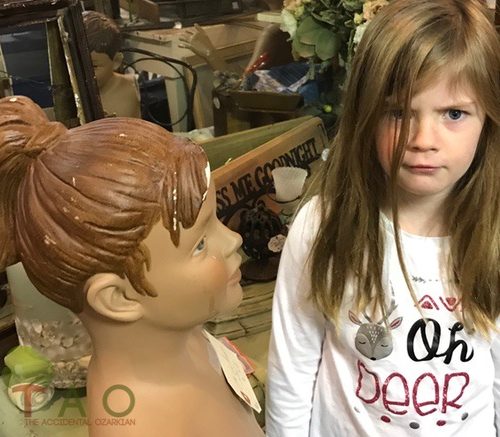 Why You Should Take Your Kids Junking