In 2007, I had the pleasure of meeting Connie and Jim Root, alpaca ranchers near me in the Ozarks of Missouri. Although the Roots are no longer in the alpaca raising business, I’m thinking you’ll enjoy the tale of 2 newbie alpaca ranchers, and maybe get some tips. ~BB

Connie and Jim Root knew they wanted a new vocation for when they retire someday. They wanted to be able to do something together on their small acreage outside of Houston where they live.

Connie describes the event that changed their lives and set their course as alpaca farmers: “I was recouping from hip replacement. We have 2 ½ acres here and we wanted something that we could do with our land. Jim came home from lunch one day and I said, ‘I know what we can do!’”

She had been watching television and saw a woman who raised alpacas. The woman impressed Connie with her statement about loving to raise alpacas, even if she could not sell their fleece or make a profit from owning them as livestock.

Now in their third year, the Roots own 11 alpacas – or if truth were told, the alpacas own the Roots’ hearts. Each animal gets a hug when it is introduced. Even the spitter gets a pat and a hug. Connie points at a female and says, “If she gets aggravated at you, she will spit at you. A lady that has over 100 of them that we know said, ‘Spit back at her!’ so we had a spitting contest out here. She can spit a whole lot better than I can. And, it’s green and slimy.”

Connie continues, “Her daughter has the same attitude and if she gets mad at you, she just pops that head back and starts spitting.”

After a long workday at their respective job sites – Jim is director of Houston’s Parks and Recreations Department and Connie works at the local Missouri Sheltered Workshop – the two enjoy coming home to the hums and gentle natures of their alpacas.

The breed has only been in the U.S. since 1984, and alpacas’ history includes a touch of mythology. Originally from the Andes, alpacas have been associated with the goddess “Pachmana,” aka Earth Mother. She loaned the animals to humans on one condition – that humans properly care for and respect the animals.

Enter the Spanish Conquistadores to Peru in the 1500s, during a time when the fleece of the alpaca brought great riches to their owners. As a means of subjugation and squelching the class system, the conquerors slaughtered masses of alpacas and llamas. Some believe more than 90 percent of these animals were killed. Natives saved the remaining animals by sequestering them in rural areas.

According to the Roots and to many other alpaca farmers, the animals are fairly easy to raise. The Roots learned a lot about the art of raising alpacas from the woman who sold them their first two females. Connie adds, “We’ve done a lot of reading, a lot of reading.”

Besides reading, the Roots have attended seminars on breeding, birthing and working with the fleece – which is considered one of the finest types of fleece in the world because it is lighter than wool, yet stronger than wool and warmer than cashmere.

The Roots recently purchased their own shearing equipment and will shear the alpacas this April at home.

Maintenance, according to Jim, is minimal. He trims each animal’s two toes occasionally, and has not had to trim any teeth yet.

On average, an alpaca costs as much to feed as a dog – maybe even less than a Great Pyrenees, of which the Roots own two. Connie says, “We have two Great Pyrenees dogs for protection. They are wonderful.” Connie put the dogs on guard one stormy night when she went out to the field to check on the alpacas with her jacket hood up. She recalls, “Max’s hair [one of the dogs] stood up on the back of his head and he started growling at me.”

An alpaca will eat about 8 ounces of pellet-type food per day and a bale of hay per week. The local MFA ordered special food for the Roots’ animals.

An alpaca’s lifespan is about 20 years. A female’s gestation period runs 11.5 months.

Even the local vet, Steven Root (whom Jim says is no relation), has been helpful and supportive of the Root’s alpaca business endeavor. Jim says that more young vets coming out of school are training to work with camelids – which are two-toed, soft-hoofed animals such as alpacas, llamas, camels and Guanacos. Alpacas differ from llamas because they have straight ears and stubby tails, whereas llamas have banana-shaped ears and long tails.

Dr. Root has instructed Jim how to handle a breech birth of a cria (baby Alpaca), but so far, the Roots’ alpaca females have had uneventful, on-average 15-minute births. One baby, though, bears the marks of birth defects. Called Miracle, she is a one-eyed, handicapped white female whose mother did not want her. After being bottle fed and cared for by the Roots, she now hobbles somewhat, but seems contented.

Alpacas do not require a barn, just a shelter. They like hillsides and prefer to drop their waste in a group pile. The dung pile is like the alpaca water cooler – a place for socialization. Jim calls the alpaca dung “black gold,” explaining that it’s good to go as a natural fertilizer as soon as it hits the ground.

Connie likes to work with the fleece and owns a spinning wheel and a loom that can adjust from 3 ½-to-7 feet to make everything from shawls to blankets. Largely self-taught by watching videos and reading, Connie says she enjoys the symmetry of loom weaving. Her basement is filled with gorgeous shawls and scarves of many colors. This is the first year that she has sent the fiber away to be processed. Through the Alpaca network, she discovered a processor in Kansas, called The Shepherd’s Mill.

The Roots have enjoyed the entire process of raising alpacas, and have been impressed by the support network. Connie says, “We have met so many neat people, and everybody who has them is so willing to help.” The Roots have traveled to arts and crafts shows to sell Connie’s creations, and sometimes take one of the males along for the day.

Jim adds, “Some folks said, ‘Well you’re going to lose your shirt.’ But, the industry is doing a lot to protect alpaca farmers. The animals are not considered exotics anymore.”

Although the Roots enjoy the end result of fine fleece, they especially like working with breeding their herd. Jim points to a male and then to a female and says, “His color and his thickness with her personality and their combined crimp … it’ll make quite an animal.”

According to Jim, a proven female with a great bloodline and color can bring up to $10,000.

The Roots are not dreaming of being rich alpaca farmers someday. They are just enjoying the journey, getting to know about alpacas and educating others about the joy of owning these gentle animals.

Junking in the Ozarks
Museums of Missouri #9: J.C. Penney Museum 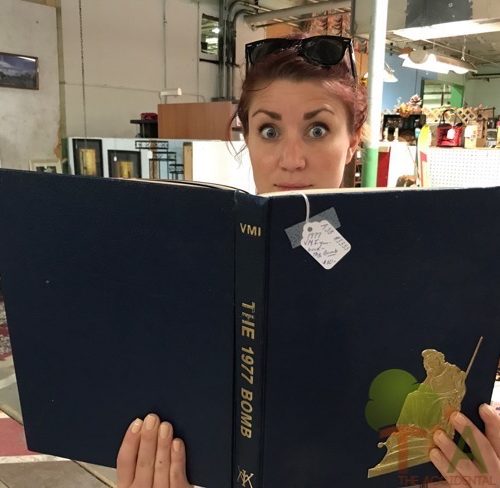